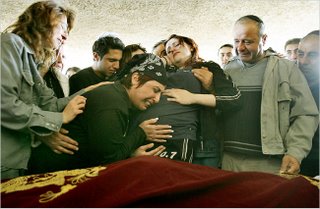 At the Impact Film Festival

Iris Bahr’s one-woman show, “Dai (enough)” , now playing at the Culture Project in NYC, is rather shocking. After walking around the Village, seeing more hipsters in keffiyehs than ever before, it’s bizarre to see a show whose standpoint–if you can even call this a political standpoint–is that those living in Israel have a right to go on living. In the play’s program, Bahr writes about her lack of political stance, how she has both the “left” impulses of an artist and the imperative of an Israeli who has to defend her country’s right to exist.

The play is also shocking because Bahr’s transition between characters is marked by a “suicide bombing.” The character collapses, the lights go out, and what seems to be a real recording of the sounds during such an event–destruction, crying, frightened yelling in Hebrew–plays in the background. During this, Bahr moves to the next of cafe tables set up on the stage and puts on some combination of hat, jacket, or shirt (as well as voice and accent–characters are convincingly male and female, Russian and Israeli) to signify the next character, who we meet that same moment a mere few minutes prior to that same bombing. Even once you know it’s coming, the “bomb” is extremely powerful. It arrives both out of the blue and at a moment when a character’s just about to do something, meet somebody, say something, and thus completely throws off the audience’s expectation for what might happen next. Suicide bombing is thus presented as something one cannot get used to, something fundamentally anti-human.

Bahr’s play is undeniably political, but it is not a polemic. To suggest that suicide bombing is, you know, a bad thing, is, in the context of stylish neighborhoods of NYC, akin to saying you’re pro-Bush, pro-imperialism, and that you think Dave Matthews Band is the very cutting edge of indie rock.

But while “Dai” does, overall, feel pro-Israeli, the pro-settler character is portrayed as verging on insanity (although when she, alongside her many children, is blown up, one does wonder…), and the American Christian evangelist character reveals the dangers of pro-Israeli Jewish Americans aligning themselves with this group. In other words, this play is definitively pro-Israeli and liberal in the contemporary American sense.

The play begins and ends with a British newscaster who’s been accused of presenting an anti-Israeli picture in her news reports. And so, after “six months” among Arabs, she heads for Israel to get a brief glance of that side. Her first target–Bahr’s second character–is a Latina actress in Israel researching for a film. The script for this film, which the character describes over a cellphone–is tied in with that of the play itself. The seemingly unresolvable cellphone argument the newscaster has with her boyfriend at the beginning and end of the play provides another parallel, suggesting that the clash between Israel and the Arabs is, like the conflict between men and women, permanent and unresolvable.

You will laugh and cry in such quick succession, back and forth, that you will leave the theater feeling both moved and, well, off. Each time the “bomb” happens, and Bahr transitions to a different character, you will find yourself recovering from tears with just enough time to really get into the next character’s world. And these are amusing worlds. The Russian prostitute, Bahr in a glittery, midriff-baring shirt and a blonde wig, and armed with forged documents claiming she’s Jewish, says at one point that if things get too violent, she’ll just go back to Moscow to finish her “PhD in physica.” The middle-aged snob–Bahr in sunglasses, shawl, and cigarettes–whose husband has a limo business in New York, demands that she speak in English, even to Israelis, because it comes “mohl natugahlly,” and contrasts crass Israel with the understanded, classy world of Long Island. The Berlin furniture designer discusses a chair he created, named after an Israeli man who dumped him, which is created to be unstable, and which has, due to its poor design, actually killed some people.

An obvious point of reference is Eytan Fox’s popular film, “Walk on Water.” Like Bahr, Fox was born in New York but moved to Israel as a child. Like “Walk on Water,” “Dai” has, among its characters, a gay German man with Nazi grandparents who’s used as a contrast to the macho Israeli, a generation is all that separates the victim and those with the ability to inflict suffering. However, the demand of “Walk on Water” is that we all just get along. The backdrop of suicide bombings is not enough, in Fox’s world, to justify any sort of retaliation or self-defense. The happy ending is a baby born to an Israeli man and a German woman. We’re all the same, and all that.

Bahr’s play presents things a bit differently. In a Tel Aviv cafe, no two people see things alike. All each character’s story has in common with the others is that the character has plans for later. Later that day, later in life, just generally for the future. Not Israel-specific plans, just plans to go on being human. And then, boom, forget it. That’s the tragedy. Whether you were hoping for a hookup, a dinner with family, a new right-wing government, or a stern talk with your son, if you’re blown up, you can forget about it.

The play suggests, perhaps most importantly, that Israel’s existence is as much under attack from suicide bombing as from Jews’ understandable preference for New York. Young Israelis want to move to New York (I should say, here) to avoid the army; older Israelis want to move here to provide comfortable lives for their children; and–and here’s the part that ought to hit the audience closest to home– secular American Jews ask their children to maintain a Jewish identity, to marry other Jews, yet choose not to live in the country where all of this would have a decent chance of happening.

It’s understandable if we give up on Israel, but that doesn’t make it acceptable. Is that my belief or the play’s message? A bit of both.